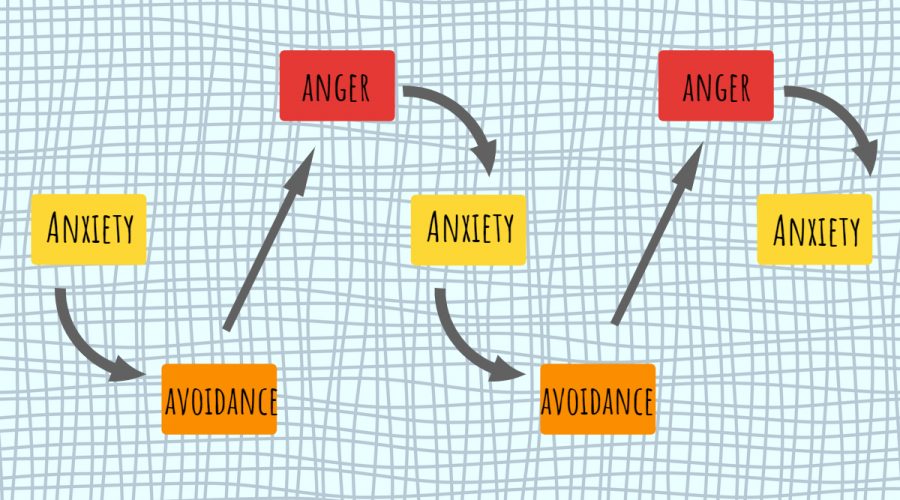 How is anxiety looking like? It may seem silly to ask because, ‘don’t we all know it?’

We may all have in mind the image of a frightened child and think: this is how anxiety looks like! The point I would like to make from the outset is that anxiety looks in all sort of ways, including, sometimes in ways that do not feel like anxiety at all. Somebody can be quite angry, even aggressive and, at the core, what is going on is anxiety. How could this be possible? I hope this will make a bit more sense to you as we move on.

Let’s start with fear. Here the things are clear, the child may be afraid of something, for example of the dark or of being left by herself. What she fears is clear, no doubts about it. This is true for all phobias: afraid of animals, bugs, germs, spiders, of the needle, of tornadoes, of open spaces, of small spaces and the list is endless. For a fear to be a phobia it needs to trigger a maximal response (for example a panic attack) always or almost always when the exposure to the feared object occurs.

But all these examples of fears and phobias follow the logic that there is something that triggers a fear response. In anxiety disorders this is unrealistic, exaggerated, and … irrational. An irrational fear indicates not only that is improbable or exaggerated but also, that is resistant to reason, that is I can try to explain or reassure for quite a bit of time without much success. It may feel for a brief time that we are getting somewhere just to be back to square one in no time.

If the child is exposed suddenly to the object of her fear (for example to a spider), you will always see something close to the maximal response, that in fact is a panic attack. It may look in different ways but most times it is a version of the ‘fight-flight-or freeze response’. One child may be loud, screaming, protesting, ‘freaking out’, running out of the room while another may appear petrified, locked in place, unable to move, with a heart racing and a feeling of a terrible danger.

If, for periods of time, there is no spider around, the child is aware of her fear and will do her best to avoid it. Will rather not go in that part of the basement where she last seen a spider, and, if you pressure her to bring you something from there, she will oppose you in whatever way it is characteristic for her, from openly defying your command to postponing it endlessly. While a fearful response clearly looks like anxiety, avoidance, opposition or procrastination appear less so. Yet, they are just as characteristic for people with anxiety, and they are part of the same process.

We can say that fear and avoidance are like the two sides of a coin, opposite but, in a way, the same thing.

For conditions like Separation Anxiety Disorder, or Social Phobia, the stimulus for the anxiety is ‘being separated from the attachment figure’, typically the mother, in the first case, or having to ‘be in school with all those people around’, in the second. A child with such a disorder may appear to flip-flop between an angry, even aggressive child in the morning when mom tries to get him into the bus and a clingy-needy child throughout the day. Parents tell me that this back and forth between being angry and aggressive just to be needy and clingy soon after is disconcerting. When they mention it to me for the first time they think of these behaviors as very different from one another. But they are part of the workings of the same process, following one another as the beads on a string. Understanding this allows us to gradually learn the language of anxiety and the particular way in which it applies in to the child that may be sitting right in front of us.

Here, it may be OK to say it. If somebody has an anxiety disorder, or any disorder for that matter, it is not enough to ‘want it gone’. Nobody can just make it go away without getting to know it. Odds are, even with excellent care, anxiety continues to be part of one’s life for a while, sometimes for a long time. As parents and caretakers of children with anxiety, the better we understand what is going on, the more effective will be in helping them. It is a bit like learning a new language, the language of anxiety, and this is needed because many of the usual strategies that we use in every day life, do not really work for anxious people.

For now it would be useful to notice that in anxiety there is a sequence of 3 steps that keeps repeating. The first step is the feeling of anxiety or dread that, because it is a form of emotional pain will force the development of a number of ‘strategies’ of escape or avoidance or defense. This defense system is the second step in anxiety. Many times, the defense is working so well that this is mostly what we see. For example a child with Separation Anxiety Disorder that is allowed to have home bound instruction will display much less anxiety almost overnight. Does this mean that the anxiety was cured? Not at all, the display of anxiety diminished because the defense, the avoidance is permitted.

Now, avoidance may be a decent strategy to diminish pain for brief periods of time but is it NOT a good strategy over the long run. It is not a good strategy because it is not adaptive. First, avoidance tends to generalize, and becomes the preferred way to deal with anything that is unpleasant or difficult. Soon this ever increasing avoidance makes life in the real world when not everything is nice and smooth pretty much impossible. Functioning is possible only in a ‘cocoon of safety’ that requires a lot of effort and adjustment from the people close to the anxious person.

These are the 3 steps in the process: anxiety followed by avoidance and then of anger. It is useful to keep this in mind because our reaction to somebody displaying fear is one of compassion but the reaction to somebody passive aggressive or overtly aggressive is not. And if you happen to be the person who has the caretaker’s task with an anxious person, being overtly upset, or counter-rejecting is unproductive. Understandable, yes, human, yes, but still unproductive.

After the anger directed at you for not allowing the avoidance or her specific defense, the child will swing again into anxiety and this needs reassurance, a sense of being safe and accepted. If at that point you are angry and rejecting (in response to the anger that was directed at you a minute ago), this adds up to a badly timed interaction. After all, anxiety is about a sense of vulnerability, and meeting it with irritation cannot be expected to help. To be clear, I do not want you to feel bad. Just to encourage you to stay as close as possible to NEUTRAL while the child is avoidant or angry. We do not want to be part of the problem, but part of the solution. It will help both of you.

This is the second part of the anxiety disorders series. The next part will review some other ways in which anxiety looks like in some specific situations.